It’s a long time since I’ve given an update.  I had wanted to write a few posts, one specifically about the civil war memorial wall downtown of which I’ve got some really nice pictures.  But when I sat down to write them the ideas didn’t really make any sense so I’ll let things simmer a little bit longer and learn a little bit more about that whole aspect of life here before I try to dive in again.
Instead, I’ll give an update on the happenings of my life.  I think most people know by now that I’ve got my own place and moved in a couple of weeks ago.  I will take some pictures and post them soon.  It’s got a beautiful courtyard with lots of trees, including a mango tree and a palm tree.  The neighbours are pleasant and I only share my pila with my downstairs neighbours who are a mom and her two teenagers.  For those of you who didn’t see my facebook post, this is a pila: 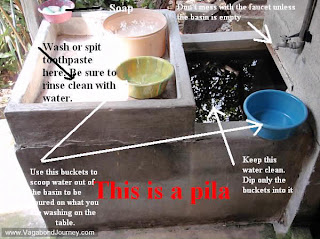 The instructions on the picture say it all.
I also have termites and cockroaches which I think are pretty common, but on top of everything else that I am learning now I have to figure out how to deal with this.  So I’m going to the hardware store to ask what I should do.  Oh, and have been without water for a week although last night it was working again for half an hour, so I was able to take a shower.  I’ve mostly been taking buckets of water from the pila up to my shower and splashing myself off that way.  At first I grumble about it and then I think about the people who work longer days than I do and are trying to raise families without having water.  They say it’s going to be shut off for another 2 weeks with brief intervals of being on at night so that people can fill up their pila’s I guess.
Today at lunch I asked a coworker for instructions on how to get somewhere in the city on the bus.  I understood for the most part, except that I took it in the wrong direction!  So when I realized that I got off, asked someone on the street for directions and then got on another bus.  They told me this bus would take me there but it didn’t.  So the bus driver gave me more directions, I got on another bus and eventually got to where I needed to be.  However, once I had gotten what I needed and crossed the street to go back, there were no buses.  You’d think with the amount of times I’ve needed to get to ANADES I would remember the address by now.  But I never do, so there I am stammering away about this place I need to get to with yet another stranger on the street.  But I must be getting fairly eloquent because he told me to walk down a few blocks and catch a different bus, which I did and which took me directly back to ANADES.  As I was looking out the windows of the various buses to locate the places where people had told me to get off, all I could think was that I am happy and that I like living here.
Posted by Lynden Neudorf at 2:27 PM 2 comments:

“It is better to travel well than to arrive.”
Buddha
The past few days I’ve done a lot of traveling.  It started with a road trip to Guatemala on Saturday with my jefes.  I went along in order to get an extension on my visa at the immigration office in Guatemala.  During the trip we realized that there might be some problems with getting my visa renewed in Guatemala, and decided that I should leave early on Monday morning for Mexico which is outside of the Central American Border Agreement and so by entering Mexico and then Guatemala again I could get another 90 day extension.
On Sunday I went out for coffee and ice cream with two friends from Guatemala and had a good time catching up with them.  Then I went to bed early so I could be up at 5 a.m. to start traveling.  I took a bus to El Carmen which is on the Guatemalan side of the Mexican border and had a good conversation with the guy sitting next to me on the bus.  He is Salvadoran but his mom lives in Guatemala and he came to visit her, and then will be making the trip back to Texas where his wife and children live.  I can only imagine the trip that he’s got ahead of him.  I got through customs at around 2:00 p.m. and hung around the Mexican side of the border for a while and was supposed to meet a friend of a friend there but for some reason that didn’t happen.  It was raining pretty heavily so I ran to the closest restaurant and ate some tacos.  I bided my time there for a couple of hours, not wanting to go straight back through customs again because I thought that might make them a bit suspicious.  Around 4:00 I went back through customs and got my 90 day extension.  There was only one bus company in El Carmen and they told me the earliest bus left at 10:30 pm.  I chatted with some guy on the street who told me that if I took a microbus to Malacatal (about 40 minutes away) I might get an earlier bus back to Guatemala.  So I tried that but by the time I got to Malacatal all the early buses had left and the next bus back to Guatemala was at midnight.  I should mention that the microbus driver was a dink and charged me Q100 (around $10) for the trip, which is pretty much highway robbery but he was getting aggressive and I thought, “screw it, just pay and find something to eat”.
So I found a restaurant where I ate a hamburger and chatted with the owner for a couple of hours.  We talked about my job (HIV prevention, teaching healthy sexuality, all that fun stuff) and about recent events in Guatemala.  There is a national election here with 26 candidates running for president.  One candidate is wife of the outgoing president who had to get a divorce from her husband in order to constitutionally be able to run.  And I thought Canadian politics was a gong show.
After that it was getting dark so I went and sat at the bus terminal which was just kind of an open room with a couple of chairs facing the street.  I sat there for about 4 hours with nothing to do.  Did I mention that I’ve got a really bad cold and am hacking up all kinds of stuff about every minute or so?  Yeah, and I had run out of my cold meds and was very tired and miserable.  At this point I had Joni Mitchel singing in my head about traveling on a lonely road and how negativity unravels joy.  It’s funny how all the work I used to do as a mental health therapist with clients (and with myself) around mindfulness, especially in stressful circumstances, was so difficult to practice.  Mindfulness is basically about being present and simply noticing situations, internal responses to the situations, etc. without letting your mind run away with them, which causes more stress and anxiety.  But being mindful helped me put things in a little more perspective which was basically, “Lynden, in the big scheme of things you are still sucking air and nothing insurmountable is happening at this moment.”  Ok.  And at 12:30 a.m. I got on the bus, dozed on and off until Guatemala city (around 6 a.m.) and took a cab to my jefes house.  They had been expecting me at midnight and so were really worried but hadn’t been able to call because my cellphone doesn’t work in Guatemala.
I slept a bit and then went to the office to check email and get a cash advance.  Then I went to the bus station in Guatemala city around 2 pm, caught the bus out at 4:30 and arrived in San Salvador at 10:30 p.m. last night.
Have I mentioned how much I like El Salvador?  Funny how it already feels like home.  Once I get into the city I notice the landmarks, and once I get to something like El Salvador Del Mundo I know exactly where I am and how to get to where I want to go.  On the other hand I always find traveling stressful because I don’t sleep well on buses, in airplanes or cars, trains, you get the picture.  But there were some interesting and enjoyable points during the trip, mostly getting to talk to people along the way and hear about their lives.
Posted by Lynden Neudorf at 9:04 AM 2 comments: