I went to the Museum of the Word and the Image in San Salvador today.  It’s a place thick with sorrow and an energy that I can’t name, a place where a knot builds in your throat as you catch another glimpse of the incredible violence that this country lived through such a short time ago.  The Salvadoran civil war lasted from 1980 to 1992, and as I was looking at images I tried to place myself somehow in them, like, “this massacre happened when I was in grade 9”.
I know embarrassingly little about El Salvador’s history.  But what I do know is that the ruling elite which were powerful families backed by the Salvadoran military owned virtually all of the country's wealth while the other 99 percent of El Salvador’s population lived in extreme poverty.  When populist movements tried to rectify this, they were branded communists by the American government who then pumped in money to train more of the country’s youth to kill their own people and maintain the status quo by military force.
There’s a great little room in the museum called “The cave of the passions” which is a re-creation of the broadcasting booth for “FMLN venceremos”, the official voice of one of the protest movements.  It’s got the broadcasting equipment, and pictures and documents of the FMLN in action.
But what got me thinking the most was how the US (and Canada, through complicity and silence) sacrificed countless lives in order to maintain Empire (world control and bargain prices for the north American consumer).  And it was an impossible situation for people to live in, so they made dangerous and sometimes deadly journeys to the north in search of a liveable life, just to become the serving class in our caste system.
One of the poems that grabbed me and shook me is by Roque Dalton (1935-1975), and it’s a love poem for his countrymen.
Poem of Love
The ones who widened the Panama Canal
(and were classified “silver roll” and not “gold roll”),
the ones who repaired the Pacific fleet
on the bases of California,
the ones who rotted in the jails of Guatemala,
Mexico, Honduras, Nicaragua,
for stealing, smuggling, fraud,
for being hungry,
the always-suspected-of-everything
(“permit me to haul you in
for suspicious streetcorner loitering
with the aggravated charge of being Salvadoran”),
the women who filled the bars and whorehouses
of all the ports and capitals of the Zone
(“The Blue Cavern”, “Panties”, “Happyland”)
the planters of corn deep in foreign jungles,
the kings of the red page,
the ones no one ever knows where they’re from,
the best artisans in the world,
the ones who were stitched apart by bullets crossing the border,
the ones who died of malaria
or of scorpion bites or yellow fever
in the hells of banana plantations,
the ones who drunkenly cry for the national anthem
beneath Pacific cyclones or northern snows,
the moochers, the beggars, the pot-heads,
the guanacos sons of bitches,
the ones who were barely able to return,
the ones with a little more luck,
the eternal undocumented ones,
the jacks-of-all-trades, the salesmen-of-everything, the ones who’ll eat anything,
the first to pull out the knife,
the saddest of the world’s sad,
my compatriots,
my brothers.
Posted by Lynden Neudorf at 4:24 PM 1 comment:

It´s been a really long time since my last post.  Again, so much has happened that I know I´ll never be able to give a real update on what all has taken place.  But some of the highlights have been that I spent some time with my MCC team for a retreat to the Mayan ruins in Copán, Honduras.  I would put captions underneath the pictures but I don't really know much about them.  But they are beautiful and very impressive. 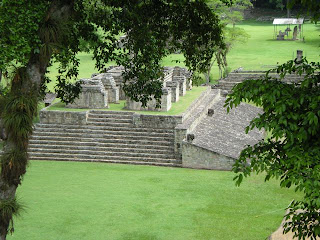 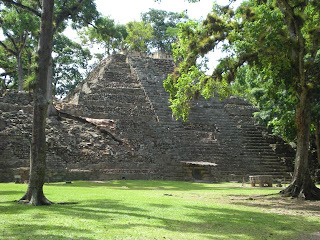 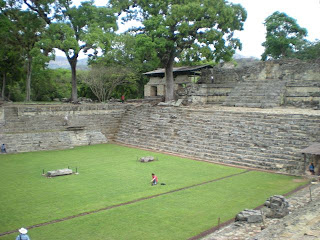 Some of the other highlights have been that I have finally started giving workshops on my own and really just getting more involved in more aspects of my job.  My first workshop went surprisingly well.  I found the youth to be funny, engaging, very intelligent and eager to learn.  Part of my work with this particular group will also be in starting up a small initiative aimed at making a little bit of money, but more importantly at working together (there are nine youth in this group) to achieve a common vision.  They decided that they wanted to buy a cow with the funds, and that they will be taking turns taking care of it.  They also want to learn to make cheese, probably ¨fresco¨, which is a soft, sharp, salty kind of cheese that usually goes with breakfast, and sometimes lunch and dinner.  Aparently none of us actually know how to make it so I´ll be trying to get someone to give us a workshop on cheese making.

I´ve also given a few other workshops which I haven´t felt quite as positive about.  Although the youth were really great, I think they were more timid and so that made it really hard to lead.  And of coure the more nervous I get, the more I start mumbling and my brain goes blank and I´m trying to think of the right words and how to put them together in Spanish while having everyone look at me either like I´m crazy or some kind of alien.  But I was debriefing with a co-worker and good friend here at ANADES who pointed out that it´s just another environment that I need to get comfortable in.  And I´ve noticed that I really have no fear in speaking spanish in most situations anymore, so what´s one more environment to conquer?

I´ve also been attending the support group for people living with HIV and AIDS.  Part of my role is to provide ¨emotional and spiritual support¨ to the people in this group. That means that at some point I should start also going and visiting them at their homes.  And I want to, I just know from experience what happens to my health when I do too much and burn out.  Anyway, the guy who is in charge of this project told me that they used to have funds for a psychologist to work with this group on a contract basis but no longer have the funds.  He knew that I was a mental health therapist in a former life and so asked me if I´d be willing to lead the group counseling sessions.  That really made my day, and I told him that I can see myself being comfortable doing that in time, maybe 4 months or so.  The difference between that and what I´m doing with the workshops is that you really use a different level of language.  For example, a lot of the workshops are concrete and factual, and I can plan before hand what I want to talk about.  In a counseling session the content is emotional (conditional and all the subjunctive tenses) which is a much more difficult level of language.  And I would just hate to have things happen that I should be responding to but am either not catching or am not able to express emotionally what I want to say.  So there is a future challenge.

Lastly, my brother in law is getting re-married in September and I plan to be back in Canada for the wedding.  I´ve got 3 weeks of vacation for this year and so have just decided to use it all during that time.  I didn´t realize that I was homesick until I started to think about all the thinks I´ve missed from home.  So it´s been really good to have that trip to look forward to.

I hope to see many of you, my faithful readers (haha), when I come back to Canada in September.  Until the next time, take care!
Posted by Lynden Neudorf at 7:29 PM 2 comments: