NYC and a message of hope

Yesterday I went with some fellow orientee's to New York City for the day.  When I first found out about the trip I decided that I would plan to do just a few things there instead of trying to cram too much in, so I booked myself tickets to Wicked , a broadway musical about the "untold" story of the wicked witch of the west.  The underlying message of the musical was about history being the story told by whoever comes out on top.  I quite agree.


Before that I also spent some time wandering around central park.  I was surprised at how huge the park actually is and I managed to lose my way a few times before finding my way back out.  Here are some images from the park: 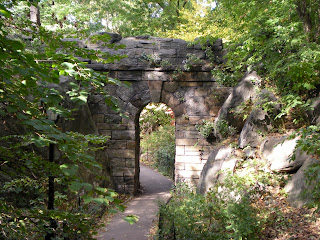 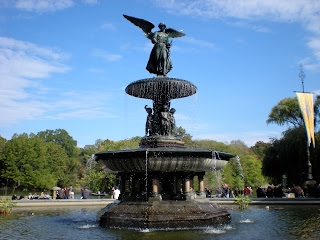 The trip was meaningful because, as anyone who knew me years ago could attest, I used to be completely obsessed with New York City.  It represented everything that small town northern Alberta definitely was not.  I wanted excitement, energy, new and interesting experiences and to come in contact with people and ideas that could shake me up and make me feel incredibly alive.  Being a musician, I dreamed about a life in the arts, with Broadway being the ultimate dream.  In contrast what I had felt like a dull, dreary world with no change, no excitement, and no way out.  So it was with some confusion that I left NYC yesterday thinking, "well, I guess I can check that off my list" and realizing that I have no great desire to ever go back.
Then today at church instead of a sermon there was a play centered on Luke 24, verses 13-33.  It tells the story, after Jesus' crucifixion and resurrection, of two men who are traveling and talking about everything that happened.  The drama did a good job of creating two characters in deep pain, including one who was emotionally shaken to the core, and the other who was angry and finding his whole belief system dismantled.  Even though Jesus walked with them for many hours and listened to their pain, their confusion and their questions, he did not reveal himself until they were at their destination.  The travelers did not believe that he had been resurrected and so they could not see him for who he was.  It made me think about how so many times it's hard to see what is new because we are still stuck in the past.  We can't recognize the opportunities we have because we can't let go of preconceived and stubbornly held pictures of what we think we want.
I never would have thought that NYC could really mean so little to me, or that going to a place like El Salvador to do HIV education could have the potential to engage and excite me on such a deep level.  There is a kind of loss even in that.  I remember the idealized and perfected images I used to have of what would make me happy, and subsequently how they have been painfully knocked out of me one at a time.  I wonder if in the end by not getting what I wanted I got something better.  I think it must be about how we grow into ourselves, and about learning to see opportunities, sometimes even in the midst of loss, and taking life up on them instead of stubbornly clinging to what we think should be.
Posted by Lynden Neudorf at 4:57 PM 4 comments:

Things seem to be speeding up toward my departure.  I finished work and sent in the final copy of my thesis all on the same day (Sept 30).  Then last night I had my goodbye party for work out at Cindy and Mark's cabin at the lake.  The staff had raided the ER shelves and so I got lots of medical supplies, some of which I think might cause some questions at the border crossings: 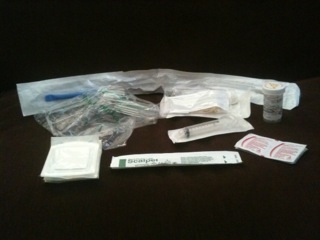 If you can't see in detail everything that's included it's probably for the best.
They also gave me this t-shirt which I can see myself wearing while I'm trying to hitch a ride on some central american highway: 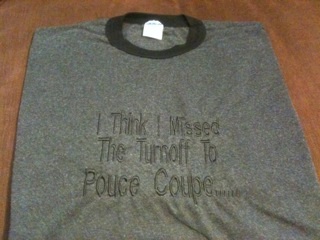 And lastly, this key chain: 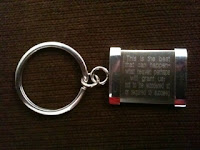 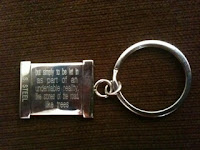 It's a poem by Argentine writer and philosopher Jorge Luis Borges and in case you can't read it, it says:


This is the best that can happen-
What heaven perhaps will grant us:
Not to be wondered at or required
To succeed
But simply to be let in
As part of an undeniable Reality,
Like stones of the road, like trees.
It's a poem that really struck me a few years back and I think it's a really good framework to go to Central America with.  It's easy to feel completely inadequate in any social work job because the need is so much greater than any resources we might have to offer.  The problems are always complex and often there are no clear cut solutions.  I know I'll probably feel even more inadequate in El Salvador so I want to keep in mind what's important, which is letting people in.  I'm glad that I've got it on a key chain so I can remind myself of that often!  Here's a link to the article about mental health and social inclusion where I first saw this for anyone who might be so inclined.
Well, I need to get my house packed so I guess that is enough stalling for today.  I've got the next three days to pack everything and bring it to mom and dad's where we'll be having a garage sale on Thursday and Friday and getting rid of almost everything.  Then is Thanksgiving weekend, and I leave the following Sunday.  Like I said, this leaving seems to really be speeding up.
Posted by Lynden Neudorf at 1:16 PM No comments: